Some Heritage Vehicles also include gold leaf work. Harrod’s and Debenham’s early vehicles featured gilding as did some racing cars. Steam Engine’s, Fairground Rides, Fire Engines and Railway Locomotives along with their Carriages also include the use of leaf.

Horse Drawn Carriages as well as Car Monograms and lining may also feature Gold Leaf Gilding. When used in places that were vulnerable to wear, especially when the vehicles were used daily, it was the practice of signwriters to clear varnish over the gold. We prefer not to do this for Honours Boards and display pieces as this reduces some of the natural lustre. 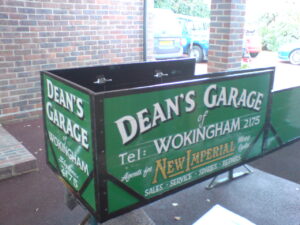